If my family finds out what happened, heads will roll.

Becky Lynn is beautiful and delicate. She is recently 18, with soft blond hair and deep brown eyes. She would normally be dressed formally and at the height of fashion, but she is currently wearing the more casual (but still stylish) clothes that she wore last night.

Roleplaying hints: You are quite used to having to make a good first impression, and although you are so far out of your element it could drive you mad, you are not going to let these folks think that you’re some harlot who comes out to bare her bosom on Mardi Gras. You are terrified to call your family; you just know something awful happened to your chaperons last night… and you think something awful happened to you, too. It fills you with such thoughts whenever you try to remember… thoughts that you’re ashamed to be thinking.

Virtue/Vice: Becky Lynn’s Virtue is Hope. Once per session of play, she regains all spent Willpower when she refuses to let others give in to despair, even though doing so risks harming her own goals or well-being. Her Vice is Envy. She regains one Willpower
point at the end of any scene in which she gained something from a rival or had a hand in harming that rival’s well-being.

Blood Expenditure: Becky Lynn can spend one Vitae per turn. She begins with five Vitae.

Healing: Becky Lynn can spend Vitae to heal two points of bashing damage or one point of lethal damage. She can do so and act in the same turn.

Physical Augmentation: Becky Lynn can add two dice to any dice pool based on one of her Physical Becky Lynn Adler Attributes (Strength, Dexterity or Stamina) by spending a point of Vitae. This benefit only lasts until the end of the turn, but she can do so and act
in the same turn.

Aspect of the Predator (Protean •): This power mitigates the effect that meeting other vampires has on her. Whereas normally, vampires react fearfully when they meet Kindred of higher Blood Potency, Becky Lynn always reacts as though her Blood Potency were equal to whomever she meets.

Resilience (••): This Discipline makes Becky Lynn supernaturally tough. Spend one Vitae to activate this Discipline. Doing so adds her Resilience (2) to her Stamina for the remainder of the scene, which also adds two to her Health. Thus She gains a ninth and 10th box on her Health track, and you should move the listed wound penalties two boxes to the right. lso, the first two points of aggravated damage Becky Lynn suffers in a scene where her Resilience is active are considered lethal instead (and therefore easier for her to heal). At the end of the scene, when Resilience wears off, Becky Lynn loses her extra Stamina and Health. The wound penalties return to their original positions (so graver penalties may immediately come into play). Any extra damage (damage beyond Becky Lynn’s eight base Health) must be healed right away at the end of the scene.

Clan Weakness (Gangrel): Becky Lynn’s blood is cursed with a potent bestial instinct that sometimes makes it hard for her to think clearly. When rolling dice pools based on ntelligence or Wits Attributes, you should not re-roll 10s (you gain a single success from that die but no chance for a second). Additionally, any 1s that come up on the roll subtract from total successes. This weakness does not apply to dice pools involving perception or reaction to surprise, or to the Resolve Attribute.

Fame: Becky Lynn is a member of New Orleans’ social elite, so the media and people in the higher echelons of society pay attention to her. Add one die to her Socialize or Persuasion when she can use her fame to her advantage, but the Storyteller also may make occasional rolls to see if anyone on the street recognizes Becky Lynn.

Resources: Although Becky would need to touch base with her family to gain access to their vast fortune, she has her own bank account and credit cards. She can spend up to $5000 without any problem.

Striking Looks (+2): Becky Lynn is beautiful. Add two dice to any Presence or Manipulation dice pool to entertain, seduce, distract or otherwise get her way by using her looks. Remember, though, that because Becky Lynn is attractive (as well as famous) people tend to remember her.

Until last night, Becky Lynn was a true Southern belle, the pride and joy of the influential Adler family. She was schooled at home and received everything she ever wanted. She attended par-
ties for others in her social circles, and probably would have found some nice young gent to marry, had fate not had other plans.

Becky Lynn had never been allowed to go to Mardi Gras, but this year — now that she was finally of age — she persuaded her father to allow her to go to the French Quarter (chaperoned, of course). She knows she had a wild night, which she blushes to recall. She doesn’t know what happened to her chaperons, but she does remember spending quite a long time talking to a man whose face she can’t even remember now. She just remembers that his name was John, and that his voice made her quake with pleasure… 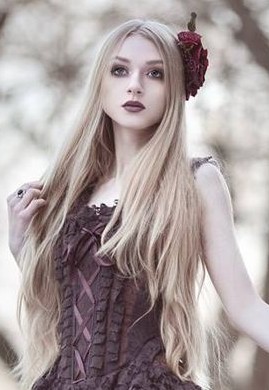